BUT I THOUGHT YOU WANTED "INCLUSIVENESS"?

Suffer women once to arrive at an equality with you,
and they will from that moment become your superiors.

Policy for Woman is eternally the conquest of the Man

From many years of listening to women recount their husband's defects,
I think their greatest gripe is having a namby-pamby spouse.
I don't know how many times I've heard an anguished female say,
"Oh, if he would only beat me when I get bitchy,
but, damn him, all he says is, 'Yes, dear.'"

ALL MEN MUST DIE!

There has never been a case of men and women reigning together,
but wherever on the earth men are found, there we see that men
rule, and women are ruled, and that on this plan, both sexes live
in harmony.  But on the other hand, the Amazons, who are reported to
have held rule of old, did not suffer men to stop in their country, but
reared only their female children, killing the males to whom they gave birth.

The female of the species is more deadly than the male. 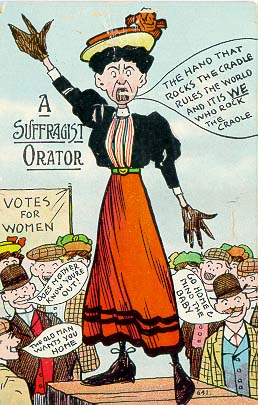 Have I not seen the loveliest woman born
Out of the mouth of Plenty’s horn,
Because of her opinionated mind
Barter that horn and every good
By quiet natures understood
For an old bellows full of angry wind?

The history of woman is the history of the worst form of tyranny
the world has ever known; the tyranny of the weak
over the strong.  It is the only tyranny that lasts. STANDING UP FOR WOMEN'S RIGHT TO STAND UP?

There should be complete equality between the sexes, which will do away
with that resulting form of hypocrisy called gallantry, or politeness to ladies.

The lady--that monster of European civilization and Teutonico-Christian stupidity ..
the institution of the lady, is a fundamental defect in our social scheme, and this
defect, proceeding from the very heart of it, must spread its baneful influence in all directions.

A MAN WOULD GO TO JAIL IF HE DID THAT - WOULDN'T HE?

Nature has given women so much power
that the law has very wisely given them little.

When women hold the helm of government, the state is at once in jeopardy

WHY IS THEIR HEADQUARTERS SO MUCH BIGGER THAN OURS?